Recently, Beth Roach Photography spent a Saturday transforming my little bedroom into a studio. The reason? Beth had mentioned that she would like to do a body confidence shoot one day and I thought, well, I need the confidence, so let’s do it. Knowing my insecurities, I think it’s fair to say that she wasn’t sure how I’d feel about it, but she said yes and immediately got to planning.

I’ve always been pretty vocal with how I feel about my body and have spent the past 2 or 3 years going from terribly skinny to a bit plump. On the whole I’m really happy with the way I look now. I look at pictures of me from high school and university and I can’t believe the size of my waist or how I ever had those moments where I thought I was fat. For the most part, I spent that time trying to put on weight, but as soon as it started to pile on I began to feel bad about myself. Letting go of something so ingrained for so long was a lot harder than I had anticipated. (Below are some photos taken over the years). 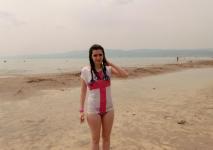 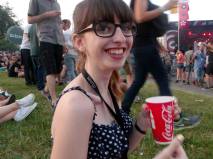 The trouble is that gaining weight doesn’t just happen in the areas you want it to. I love my body and my curves, but my biggest pain point was the suddenly podgy tummy that had been non-existent for most of my life. I became really focused on it and as the clothes in my wardrobe began to feel tighter and tighter, I got more down about the way I looked.

So I started running. I signed up to run a marathon, because clearly that’s the smart option when you want to tone up (not – but it’s certainly a good motivator). I used to run before university but had stopped because of a recurring injury (which I later discovered was due to a bad pair of trainers). I met up with a friend after a couple of months without seeing her and she said three words to me, that were like a wake up call.

My gut reaction to her words was glee. I feel ashamed to admit it, but I was over the moon. I said thank you. And then, I realised that I had become the kind of person who dwells on their weight, to the point where it becomes a negative thing. It dawned on me that every conversation I had with someone was about my weight, about how much I wanted to lose or how my jeans were feeling looser. I was actively bringing it up. It makes me really sad, because I never wanted to become obsessed with something like that. I realised that it wasn’t anyone else’s decision but my own and that I should stop focusing on the negatives and instead learn to love what I’ve got.

My stomach is still there, a bit podgy. I don’t love it but I feel like I’ve accepted it a little more, which means I’m getting there. Stripping down to my underwear and posing in front of Beth was a nerve-wracking thought, but one I didn’t want to let defeat me.

And I was really surprised at how confident I felt. Once the camera was clicking away, I loosened up and just let Beth work her magic. She was great with directing me and making me feel comfortable considering I was practically naked. Her suggestion for the shoot to take place in my own bedroom helped massively too, as I didn’t have to get used to a new space.

Beth was really open to my ideas and reminded me that I was getting just as much out of the shoot as she was. She wanted me to be happy with the shots, which meant I had to explain what I did and didn’t like about myself too. On the back of that, she picked the angles that would accentuate my favourite parts. Her friendliness was really comforting as I felt I could talk to her about these things, while sitting there in my Calvin Kleins (deliberately chosen for the event, of course).

I totally adore these photos and am learning to embrace each and every imperfection on my body. Beth has helped me come a long way with this and I can’t wait to see what’s next. Take a look below for the rest of the photos from the shoot!

A massive thank you to Beth for taking these photos and reminding me that there is so much to love about myself! Check her out, she’s pretty darn good.