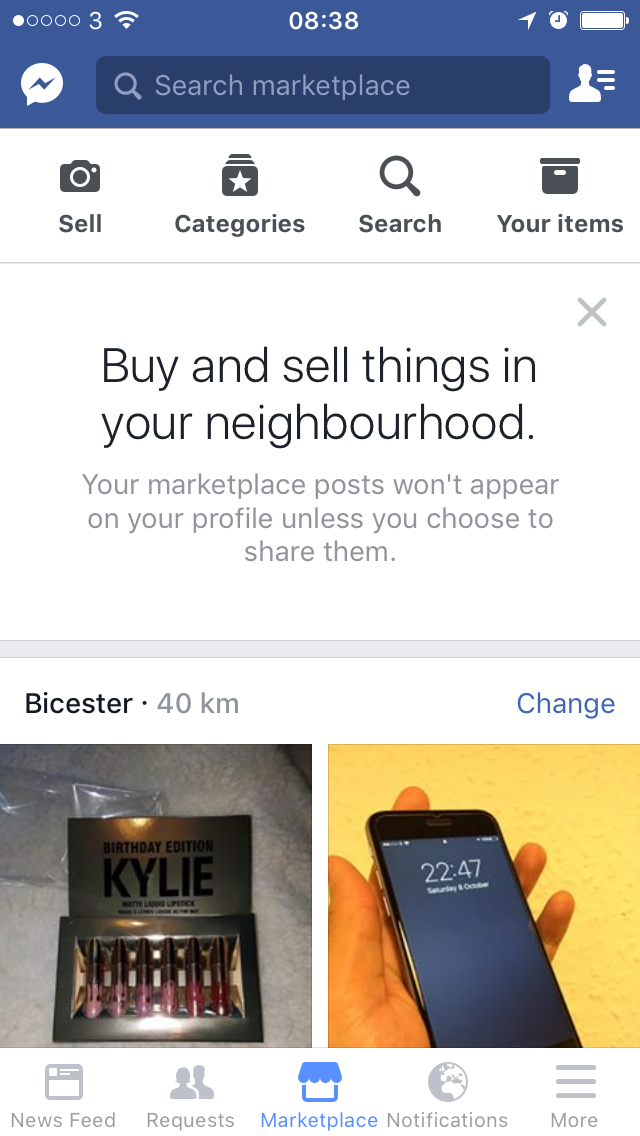 As I’m sure many of you realised this morning when you unlocked your phones, Facebook has rolled out a new feature within the app called ‘Marketplace’. If you haven’t had a chance to look yet, it’s basically a buy-and-sell app within Facebook. You can set a distance to buy from – mine automatically set to 40km from my home town. 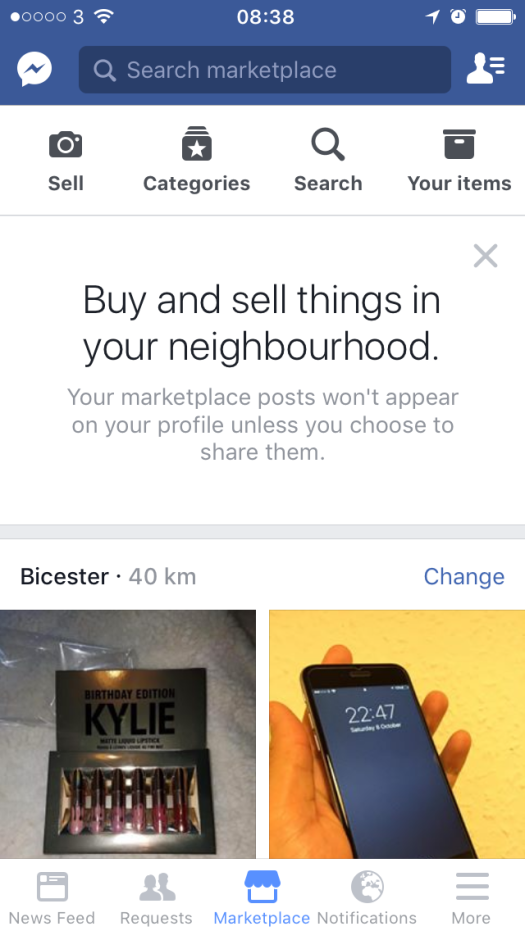 Of course, this is going to take a bit of getting used to. I keep pressing the marketplace button when I mean to go into messenger. But Facebook is moving with the times, and the times are clearly calling for more integrated marketing. This is especially important considering that Google is about to start penalising ‘invasive pop-ups‘. It’s all about making the marketing as subtle yet effective as possible. (FYI, covering my entire screen with an ad that I can’t seem to close is neither subtle nor effective).

I have to say, with the number of ‘buy and sell’ pages that people set up for local areas, Facebook has definitely found something worth exploring here. Already, it’s been filled with products ranging from stupid to genuine – I saw a meme on sale for £1, a necklace on sale for £2,000, a car for £500 and a used toilet seat for £20.

The thing about Marketplace, is that it’s not just for people who want to sell their bits and bobs. I’ve seen a couple of businesses using it (whether that’s allowed or not is another question!). It does make me wonder if it’s going to take away from sponsored ads as well as existing sites for buying and selling (e.g. Gumtree, eBay etc).

I’m intrigued to know how they’re going to prioritise the listings too. At the moment, I can’t tell whether it’s based on distance, or time of upload, or if it’s just a bit random. The top few on mine vary from fairly recent times, but jump from ’30 minutes ago’ to ‘5 minutes ago’, so it can’t exactly be chronological. And of course, I’m wondering whether, if businesses do have full access to the use of Marketplace, do you pay a certain amount to have your ad shown further up in the listings?

I went through the process of adding an item to sell (without actually finalising it), and the steps are as follows:

1. Select an image of the product you want to sell.

2. Give it a name and a description.

4. Add any final info such as location and the category of the product you’re selling. You can also choose to share it on your profile.

So there doesn’t seem to be any cost in actually putting an ad out there into Marketplace, but I’m definitely wondering whether some kind of pricing/priority listing is going to come into action.

As for the concept itself, I do think they’re onto something. If the aim is to make Facebook and the applications that belong to it the only apps we need, then it’s certainly making that attempt clear.

I mean – there’s also the rolling out of Shopify for Messenger to consider. I read a great blog about that here, which is definitely worth a read.

Hope you all enjoy selling your stuff on Facebook Marketplace!